We are … two humans and a cat (you know that already). We live together in Chapel Allerton, a very nice suburb of Leeds; actually we’re just outside Chapel Allerton proper, but estate agents describe our house as being in Chapel A because it’s a desirable area.

Phil and Rose have been together since 2001, and we got married in April 2010. Lily joined us in 2020, a few months after our previous cat, Cal, died. We fostered Lily when her previous human, our friend Clare, became too ill to look after her; later on.

Phil loves computers, cooking and cats,  as well as a number of  things that don’t begin with ‘c’ . He lives with an amazingly gorgeous, smart and funny woman, though he is probably regretting giving her access to editing this part of the site…

Phil: Non, je ne regrette rien! I also tend to love things beginning with ‘s’, including snails. (Though for some reason I don’t feel the same about slugs.) Speaking of small creatures, I have befriended woodlice for many years despite their tendency to eat apples and strawberries. I can’t criticise them as I share that tendency. 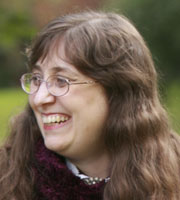 Rose is a Zen hypnochick who loves music, the natural world (especially the sea) & making jewellery. She also enjoys the extreme sport of smiling at people she doesn’t know. Like Phil, she is fond of snails, and we do our best to rescue snails (and slugs in Rose’s case) in danger of being trodden on.

Lily with one of her catnip toys

Lily is a lovely, affectionate creamy-white senior cat. When she’s not snoozing on the bed she loves to explore Rose’s wardrobe or (when she manages to slip in) the garage, or to wrestle with catnip toys. But her greatest delight is to lie on her back and make it very clear she wants one of us to rub her tummy – the more vigorously the better!